During my first journey to Bosnia after the beginning of the pandemia I reach Jaice around noon. The town was the capital of Bosnia and the seat of the kings until it was conquered by the Ottoman Empire. However, it is known beyond the country itself because it was here, in the winter of 1943, that the partisan movement developed its first concept for a socialist post-war Yugoslavia.

The third thing the city is known for is an impressive waterfall, which is my first stop.

The way to it branches off at a petrol station, which somehow does not fit into this ambience.

If you don’t need petrol, you can choose from many souvenirs that look as if they are shopkeepers from the Yugoslavian era, but are still selling well today: There are ethnic barbies in different national costumes peacefully gathered in brotherhood and unity, and of course the beloved comrade Tito. 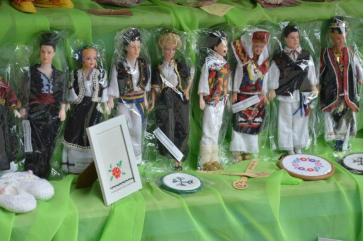 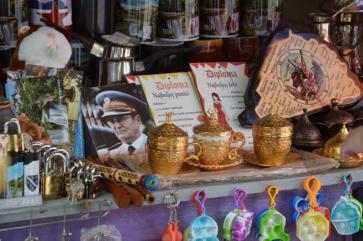 But you would look in vain for Serbian flags here, I think, as I descend the steep path into the gorge.

And at some point I stand in front of a grandiose natural spectacle that attracts many tourists, most of them Arabs, even in Corona times:

It is noticeably cooler here than up at the souvenir stands. However, some people also shiver because persons suddenly flies over them at a dizzying height: if you want, you can fly over the thundering masses of water on a slackline.

Anyone listening to the radio or watching television in Bosnia at the beginning of August might have thought they were back in the Federal Republic of Germany in the 1970s: All news broadcasts began with the family name „Schmidt“. This time, however, the first name was not Helmut, but Christian.

The former Federal Minister of Food and Agriculture has recently taken over the not easy office of High Representative for Bosnia and Herzegovina. This change of office is associated with a number of hopes there.

We are therefore taking the opportunity to present the country, which we recently visited again for the first time since the beginning of the pandemic, in a few articles. We do not want to give a historical or political introduction, but rather, with short impressions and many pictures, to whet your appetite for a European country that for many is terra incognita with negative connotations. The focus is on two cities that are historically very important for the country, namely Jaice and Travnik.

﻿You can find episode 1 here.

As soon as another episode is released, we will link to it here.